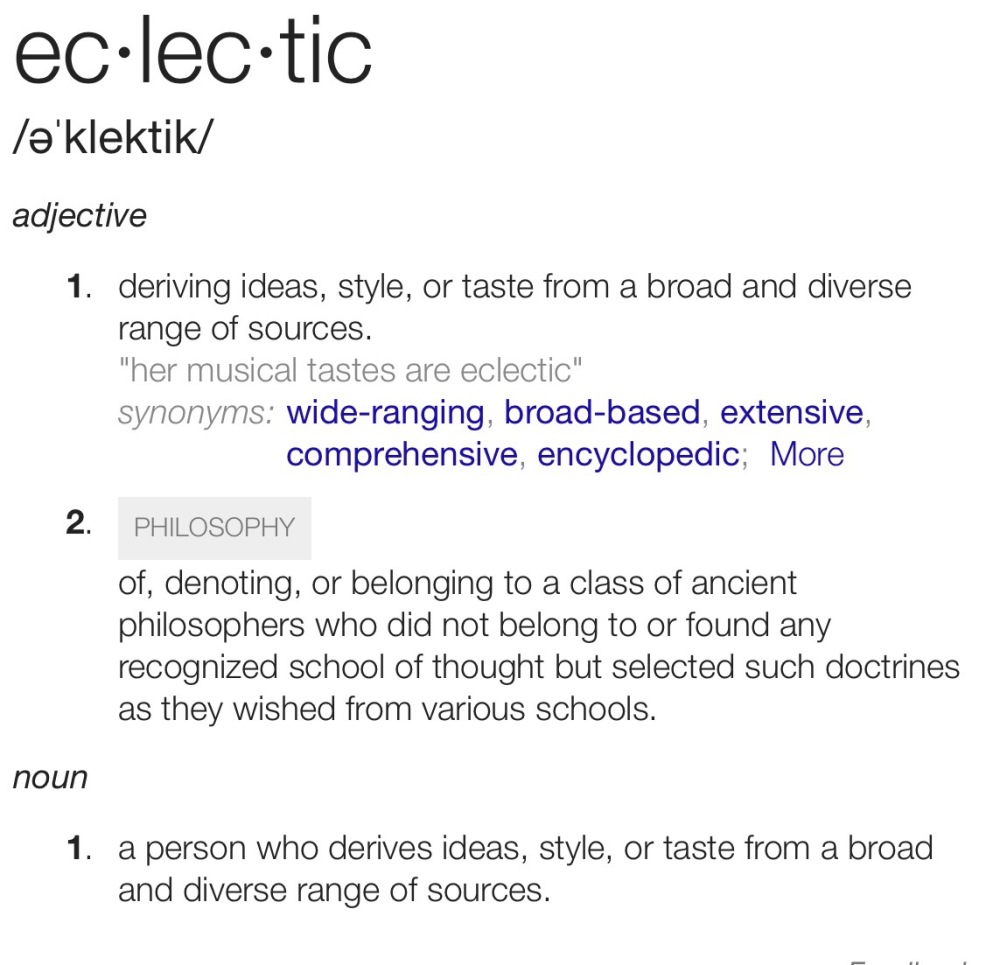 I’ve been told, “your very eclectic!” Nothing I’ve strived to be, but naturally this is the person I’ve become. Based on the definition of eclectic, I can honestly say yes; I am a person who embraces ideas, styles, and taste from a diverse range of sources. When I reflect on my life I think there are plenty of experiences that have attributed to this.

1. Born & Raised in New York– I was born in Bronx, NY in 1986. We all know that New York is a place where different peoples, styles, theories are mixed making it a “melting pot.” It wasn’t until I was about 10 years old that we relocated to Virginia. Children up to the age of eight are the most impressionable. At an early age I was exposed to a multitude of culture and diversity. The Census Bureau considers the Bronx to be the most diverse area in the country. The Bronx is the only New York City borough with a Hispanic majority, many of whom are Puerto Ricans and Dominicans. At a young age I was introduced to different food, language, and living styles.

2. My mother is biracial– In America without question my brown skin is an indication that I am black and or “African American.” Yes, if asked black is what I identify as, but many people do not know that my mother is biracial. My grandmother was black and my grandfather is Italian. Ironically my mother is in New York right now ready to fly to Italy in the next 2 days. Being that my mother grew up in New York all her life and had a parent from a different cultural background she herself is very eclectic. I did not grow up on some of the same traditions that many of those in my minority group did. Most people automatically assume that if your African American you grew up eating traditional soul food, you are Baptist or Christian, and that other stereotypical things are practices. My mother was different. She exposed me to food from various cultures since I was younger. She took my brother and I to different places like science museums, farms, and programs to learn. During my adolescent and college years she exposed me to different spiritual practices and set me on my path to practicing things like feng shui. As an adult, each Christmas we pick a culture and make a meal spread based on that cultures food traditions. For example we’ve learned how to make our own sushi. She is currently learning how to speak Italian and has encouraged me to do so too. She and I practice yoga and meditation. We both blog! Having my mother raise me in such a way that was different than the status quo really had a great impact on the way in which I live today.

3. Attending a college that was not an HBC– I knew early on that I wanted to attend Virginia Commonwealth University (VCU). VCU is a public research college located in the heart of Richmond, VA. What I liked most when I visited for the first time was that’s it student body was multicultural. The student population is very diverse which brought a certain comfort to me. Richmond almost reminds me of a mini New York. Because there is a multicultural presence in the city it lends to the development of stores and shoppes that provide a great deal of variety in terms of food, clothing, and other products. Studying at VCU afforded me the opportunity to meet people from all walks of life, attend events hosted by their Office of Multiculural Student Affairs (OMSA) which coordinates monthlong celebrations such as Hispanic Heritage Month, Black History Month, Women’s History Month, and be in a historical city like Richmond where the urban residential neighborhoods also hold a particular significance to the city’s fabric.

4. Transforming into an adult and raising my own family in Richmond, VA– Since graduating from VCU in 2009 I have been in Richmond for 7 years. I must say as much as I desire to live somewhere like Florida I really love what Richmond has to offer. Because Richmond is made up of several different universities and colleges it increases the city’s population each year and brings forth more cultural diversities. Aside from the city’s diversity, Richmond is home to a multitude of museums, memorials, and monuments. Richmond also has a significant arts community, some of which is contained in formal public-supported venues, and some of which are more DIY, such as local privately owned galleries, and private music venues, nonprofit arts organizations, and organic and venueless arts movements (e.g., house shows, busking, itinerant folk shows). Richmond is now known as the art district because of the Richmond Mural Project that started in 2015. Internationally recognized street artist have come and created street murals all around the Richmond city. I have spent time “Mural Mapping” since then. See previous post on the Richmond Mural Project. The Richmond is also now recognized for being a “foodie” city because of all the various small and large businesses that offer food not otherwise expected. Each year my children and I attend festivals around the city that’s staple is the variety of food they introduce the communities to. Richmond also has beautiful parks and outdoor recreation that all offer fun programs and activities throughout the year. See previous post  What is Fun? Butterflies? Festivals?.

5. Motivation- motivation is literally the desire to do something. I consider myself to be very motivated. I love to learn and experience all things. My idea of life is to go outside the bubble, leave your comfort zone, and do what Dr. Seuss said, “Try, Try it, you may like it.” My recent purchase of a bike and engagement with a group of peers to create a bike group that now has over 100 people participating monthly is just 1 more recent example of what I mean. The other night we had our monthly ride and I took a good look around – out of 100 plus riders there were only about 4 people of color and 1 of those people included me. Was I bothered? Of course not, in fact I was proud that I don’t allow being the different bulb to discourage me from experiencing certian hobbies and interests that I haven’t. I believe it’s so much out there for us as people to experience but we hold ourselves back out of fear, judgement, and sometimes in a weird way to uphold stereotypes. It saddens me when someone refers to their minority group stating, “we don’t do that.” No, you don’t do that- stop generalizing to a whole population otherwise we end up with people that feel they can’t do something or will be clowned for doing so. I pride myself on not allowing the opinions of others to guide my way. We all are in control of our happiness and they way in which we experience this thing called life. There are somethings that are certian, one of which is all things ends and that includes life. Why not live it to the fullest! My children are small right now but once they get bigger I intend to travel the world with them.

I love being open to the idea, styles, and taste from the rest of the world!

Eclecticism? What does that mean to you? Are you eclectic? In what way? Share your thought.

“I need eclectic people in my life” -Chris Terrio